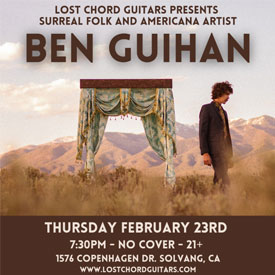 Ben Guihan describes himself as a visual songwriter, portraying surreal images and characters that come to life in cinematic verses, matched with a colorful guitar style rooted in traditional folk. His album Mise-en-scène was recorded in Connecticut at Dirt Floor Recording and Production. The album, which is Guihan’s first studio produced record, released on vinyl and all major streaming platforms on December 10th 2021. Ben grew up in Vermont, spent some time in Boston busking around Harvard Square, then made his way down to Providence, Rhode Island. With Providence as a home base, Ben spent several winters traveling the country in a custom built wooden camper on his ’94 Ford Ranger. Ben would craft songs as he went, Playing coffee houses, saloons, galleries and book shops throughout the south, west, and coastal California, and eventually relocated to the high desert of Taos, New Mexico, which he now calls home.

Receive 5% off now when you book directly with us.

UNLOCK MY 5% OFF SPECIAL