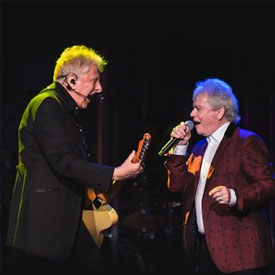 Air Supply is an Australian soft rock band based in Melbourne, Victoria. Formed in 1975, the group consists of just Russell Hitchcock and Graham Russell, who are now recognised as two of Australia’s biggest exports, boasting a handful of platinum records and a spot in the ARIA Hall of Fame.

Receive 5% off now when you book directly with us.

UNLOCK MY 5% OFF SPECIAL